Henri's Journey with his father, Sami from Finland

in Busan, Korea with my family

We took the metro for 4-5 stations to Seoul Station with our TKD friends.

We waited for the KTX for about 30 minutes.

We then arrived to Busan station and met with GM Kim.

We found the station car parking lot and then GM Kim’s car.

We drove through town to his apartment building on his nice BMW.

There we met with his younger son.

We walked to a glass bridge( Oryukdo Skywalk ) together,

it was not far from his place.

After that we started a walk to a forest up some steep stairs.

(from Oryukdo park to Likidae) I was a bit nervous

as I had a bad burn mark on my left foot and it hurt quite a bit.

so much cold spray on my foot when I twisted it and there was now a big burn mark.

On top of the stairs there was a path that went to the forest by the sea.

At some point there was a nice photo platform and we bought ice cream.

We took the ice cream with us and continued.

The walk was maybe 1,5 hours and we got to the end

and saw some men fishing. At this point I told GM Kim that my foot really hurts

and we stopped. He started pressing on my arm and it felt quite funny.

I do not know what he did but it didn’t really help.

After that we walked up a steep hill towards a restaurant for lunch.

They also served Kimchi and some other stuff to the table.

The soup wasn’t my favorite but I still ate half of it.

After this went to a funny local desert bar(할매손 팥빙수)

It was pretty nice. GM Kim’s wife picked us up near this place

and we drove to GM Kim’s house.

We had fruits, berries and coffee in his living room.

The view was amazing directly to the ocean.

GM Kim started to press different points on my arm

He did this for maybe 3 minutes. He then asked me to walk around

and I was amazed because the pain from my foot was totally gone.

I started smiling and I was very happy.

I asked my dad how was this possible? (Frozen Shoulder -오십견)

He then did some weird things to my dad’s arm.

His shoulder has been really sore for over a year and

he has not been able to lift anything with his arm.

and then he was able to lift his bag all the way up with his bad arm.

He then drew maybe 7 little circles to my left arm

and showed me how to massage these myself.

Point was not to press hard.

possible by any kinds of stuffs - Magic Circle Massage?

Then I got really tired

and Kim’s wife took me to their bedroom

After this their older son, who is a doctor,

started looking at my burn mark on the foot.

He broke the big blister and put some medicine on it.

He also put a new bandage on my foot.

Mrs GM was very nice and she was holding my hand all the time.

I felt very safe and much at home. He had a very cool office

and I thought there would have been more swords but there was only 4.

and saw the school where his wife is a teacher.

We then went to a Japanese restaurant that was really nice.

GM Kim then took us to the train station and he waited with us until our train left.

He also met with our friends from our TKD club.

Funny thing was that as my burn mark was actually very bad,

two days after our trip to Busan,

it had healed totally and I didn’t need even a bandage.

I am sure he did some magic tricks.

translated but not modified by Sami) 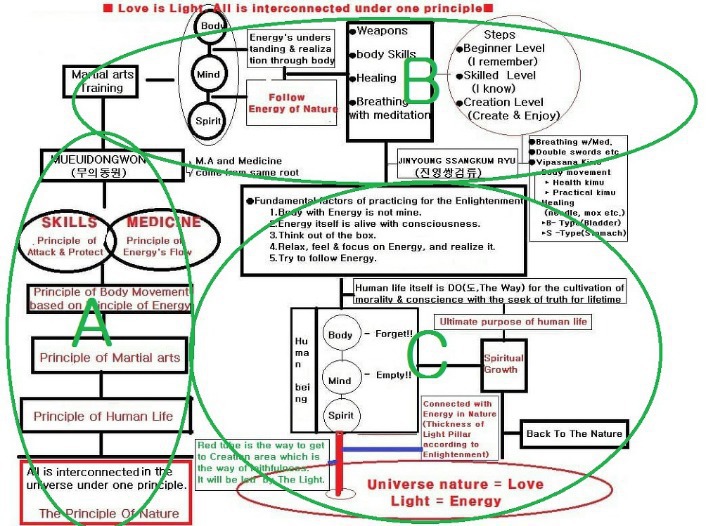 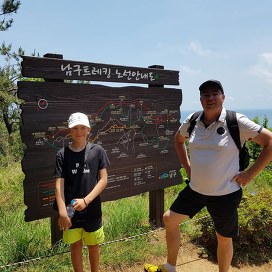 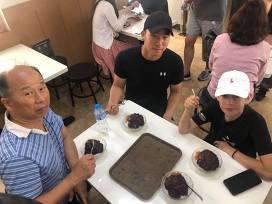 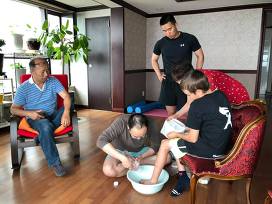 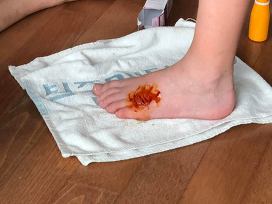 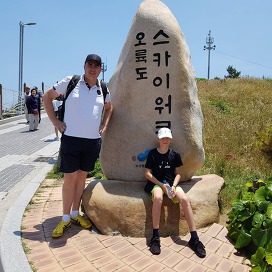 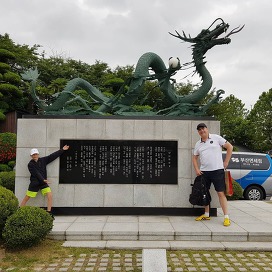 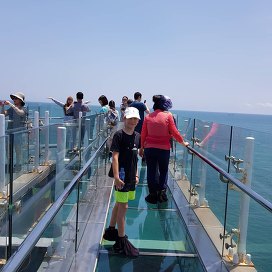